Vanakkam. As this blog’s resident eldritch entity from beyond space-time and incorrigible weird skeptic, my vile Troythuluness has arranged and carried out a neat little experiment of sorts with art as a memory device.

Actually, it’s more of a quasi-experiment from its informal, quasi-scientific nature. It’s taken more time than I’d have liked, to run through ideas on how to organize this, much of that time selecting effective memory cue locations, but here it is, with setup and outcome discussed!

In using any work of art as a memory device, such as that may be as art, there must be locations on it or in it to encode information at in the mind, and these locations on the image must follow an obvious sequence.

First, a shoutout is due: the credit for this goes to the book Memory Craft, by Dr. Lynne Kelly. The book discusses and explains a number of memory aids, including those popular in the Middle Ages and across the world throughout ancient times, prehistory, and during the modern era by indigenous cultures.

Those techniques, because of their reliability, are still useful and valid, even as books have become much more common during the modern era, and much cheaper in the last few centuries. Human brains today work in pretty much the same ways and just as well as those of 500, or 5,000 , or 50,000 years ago. Neuroanatomically, we haven’t evolved that much, and are no smarter than our forebears in terms of sheer brain power. Genius exists in all eras and among all peoples.

The idea for this informal test of the usefulness of an art print comes from the chapter on art as a memory device. You can find the link to the book and other resources by Dr. Kelly here: https://www.lynnekelly.com.au/memory-craft/

Here’s how I did this:

I employed daily episodes of Massimo Pigliucci’s podcast, Stoic Meditations, from June 8 to July 15 of 2020, with an average length of a couple of minutes each on an art print of one of my fractal pieces. Without tactile cues on the print, it’s important to bring the visual cues to bear, to attend to the meat of each episode while tracing out the path of that sequence with my eyes and in my mind, making use of memory’s tie to visuo-spatial information.

The aim here is similar to the use of a mandala, and at each location I store in memory the most important content of the relevant podcast episode before moving on to the next, where I memorise the contents of a further episode, and so on, until the sequence along the figure ends.

At the publishing time for this piece, those episodes may still be found in the feed for the current season of Massimo’s show. I’m including an annotated photo of the print with the path the sequence takes from one side of the print from the left to its far side on the right. I didn’t utilize the original image file of the fractal for this, as there are differences in aspect ratio between original file and printed hanging that would cause discrepancies in the locations chosen. Also, even with my computer’s current monitor, a large printed wall hanging makes it much easier to make out small details in the image with my aging eyes as well as serve merely to decorate an otherwise sparse wall. The image below has been marked up with blue lines for the sequence, each memory/marker location marked with a blue one-to-four dotted circle. 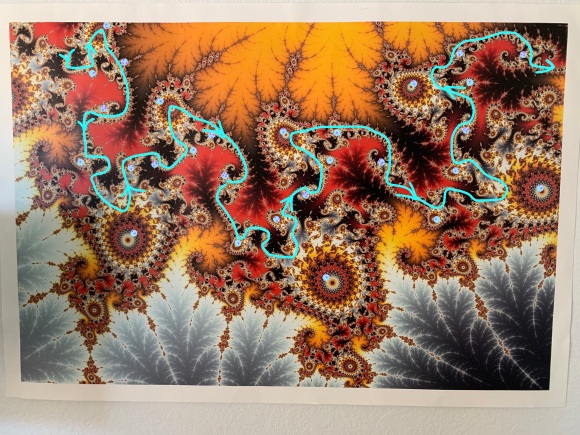 Note that the fuzzy repeated spiral sea shell-looking things, aptly called nautili, are memory locations with the mini-Mandelbrots and their opposed double spirals as special marker locations in the sequence; the fourth location preceded and followed by three nautili, so there is a repeated sequence of similar objects in groups of three followed a fourth in seven distinct regions of the print from left to right in a wavy pattern.

While each of the three nautili in a sequence are very similar, they are of differing sizes, orientations, and locations on the print, as are the mini-Mandelbrots. There are, of course, no layered paints, no 3-D printing involved, no fabric canvas, nor any other significant tactile feature on the print.

So there are no touch cues I can attend to well enough to aid memory, not even the feel of fingertips on the stucco of the wall behind and through the print. Haptic sensation is here quite unhelpful.

So, after following the path sequence, I was able to reinforce recall of each episode’s essential content in enough detail, going through and replaying each episode to verify my recall by the time the quasi-experiment concluded.

Despite my relative inexperience with this technique, the results were fairly easy to achieve, as I utilized each episode’s content to tell a story embodied by a fictional, or in my case, fictionalized character, what Dr. Kelly has termed a Rapscallion, though I favor the term Prodigal for mine, after the profligately empowered super-beings from my Gods of Terra superhero/SF setting.

My Prodigals for this go included Socrates, Seneca, Marcus Aurelius, and Epictetus, four major figures in Stoic philosophical history (Yes, I know that Socrates was not technically a Stoic, but some of his contributions to philosophy were incorporated into Stoic thought. Bite me.), they and others acting out in ways which I needn’t detail here. I’ve no real idea what they actually looked like, and surviving depictions have their own problems in accuracy, so I imagined unique and comical caricatures of them, as per popular American-style cartoon animation. The more comical, the better.

All in all, this turned out extremely well, and was a fun exploration of a useful memory method, even given my own considerable wants in the memory department!

2 thoughts on “My Memory Craft Quasi-Experiment: Utilizing Art as a Memory Device”

Commenting below. No spam or trolling, or my cats will be angry. Cancel reply

This site uses Akismet to reduce spam. Learn how your comment data is processed.